During VMware Explore VMware announced the rebranding of the vRealize portfolio (and a few other solutions) to VMware Aria.

I'll not discuss the name change in detail in this post and what I think of some of the more lengthy and intricate names, I will however take a quick look at a couple of the new(er) products in the portfolio which was a focus both during VMwware Explore and also in today's Multi-cloud Briefing.

VMware's Aria portfolio is out to solve issues in the Cloud Management space. VMware divides the challenges of Multi-cloud into four principles

The different products in the portfolio are set to solve challenges in one or more of these principles which makes sense, there's no magical product that can do everything and solve all your problems.

The VMware Cloud Operating Model, which I mentioned in a blog post a little over a year ago, is still a part of the picture, and is the recipe VMware wants you to use for solving the challenges.

A new phrase used during Explore was the "from Cloud Chaos to Cloud Smart" which we'll probably hear a lot going forward.

From vRealize to Aria

As we can see the new Aria portfolio can be split in three pillars or outcomes; Cost, Operations and Automation.

VMware Aria Hub is the productization of Project Ensemble announced during VMworld last year and something I'm really excited about.

Aria Hub is an overlay over not only the other Aria products, but also cloud providers. Also it doesn't only pull data in from the cloud providers and the Aria portfolio, but it can also interact with the Aria suite to solve cross-cloud use cases. 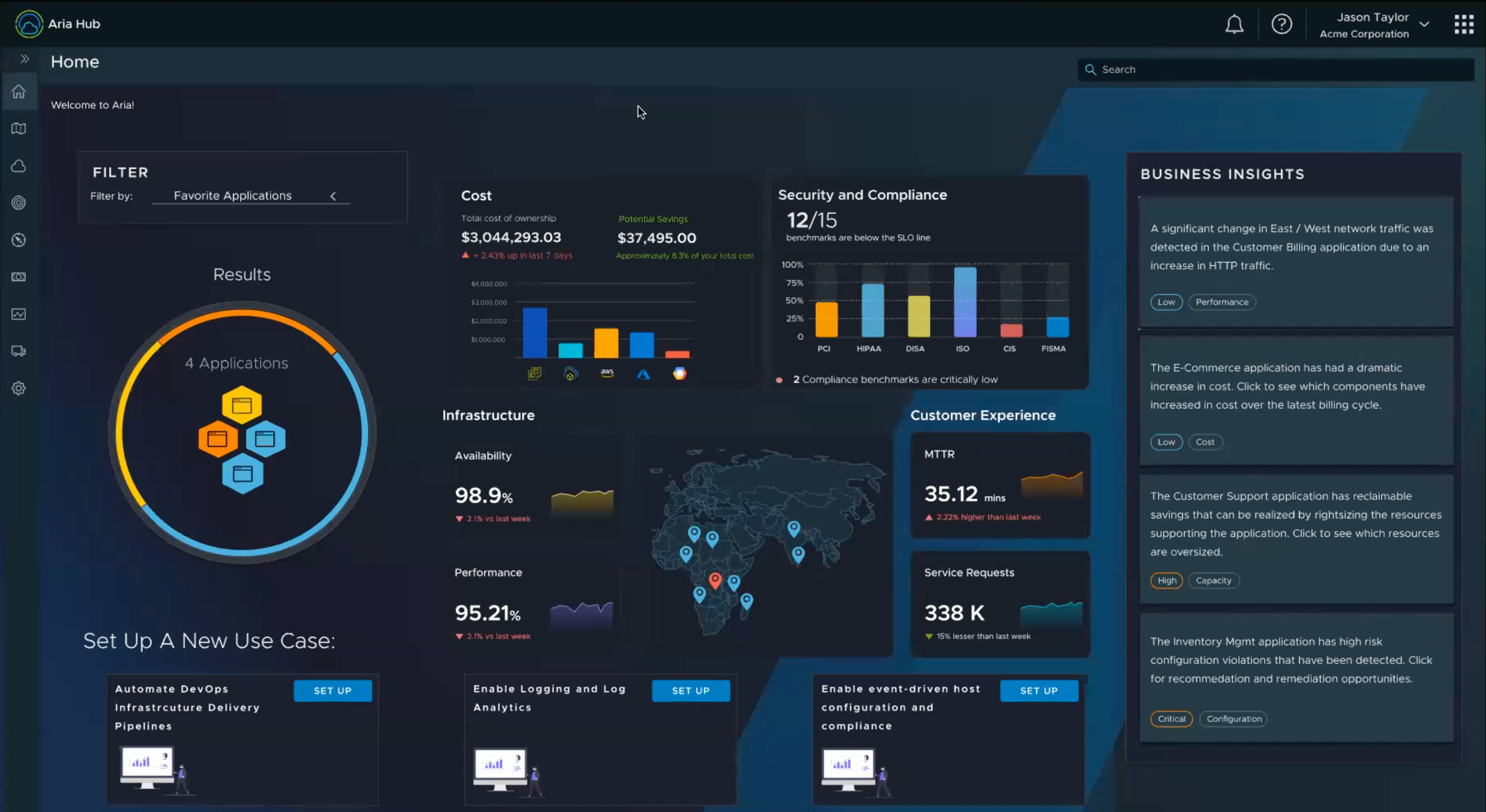 The secret sauce in Hub is the Aria Graph. Built on GraphQL it provides a single interface to your environments, which let's us use a single API call to pull data from multiple sources.

Aria Hub provides a Global View, or a Single pane of glass if you will, of our environments and sits as a layer on top to help solve those cross-cloud challenges through one interface.

A couple of features to mention would be the ability to map your Applications and what resources it consists of, and connects and interacts to 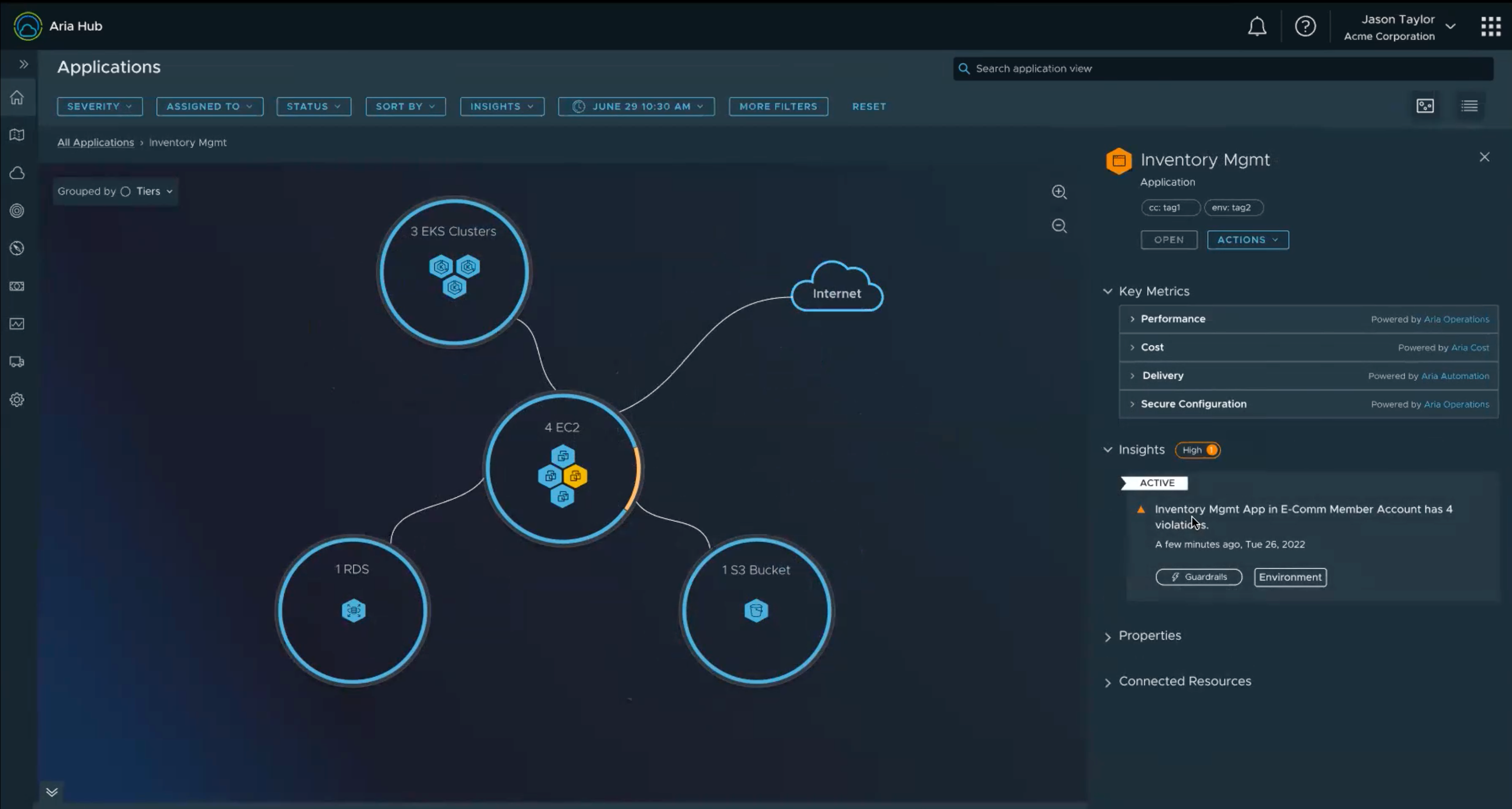 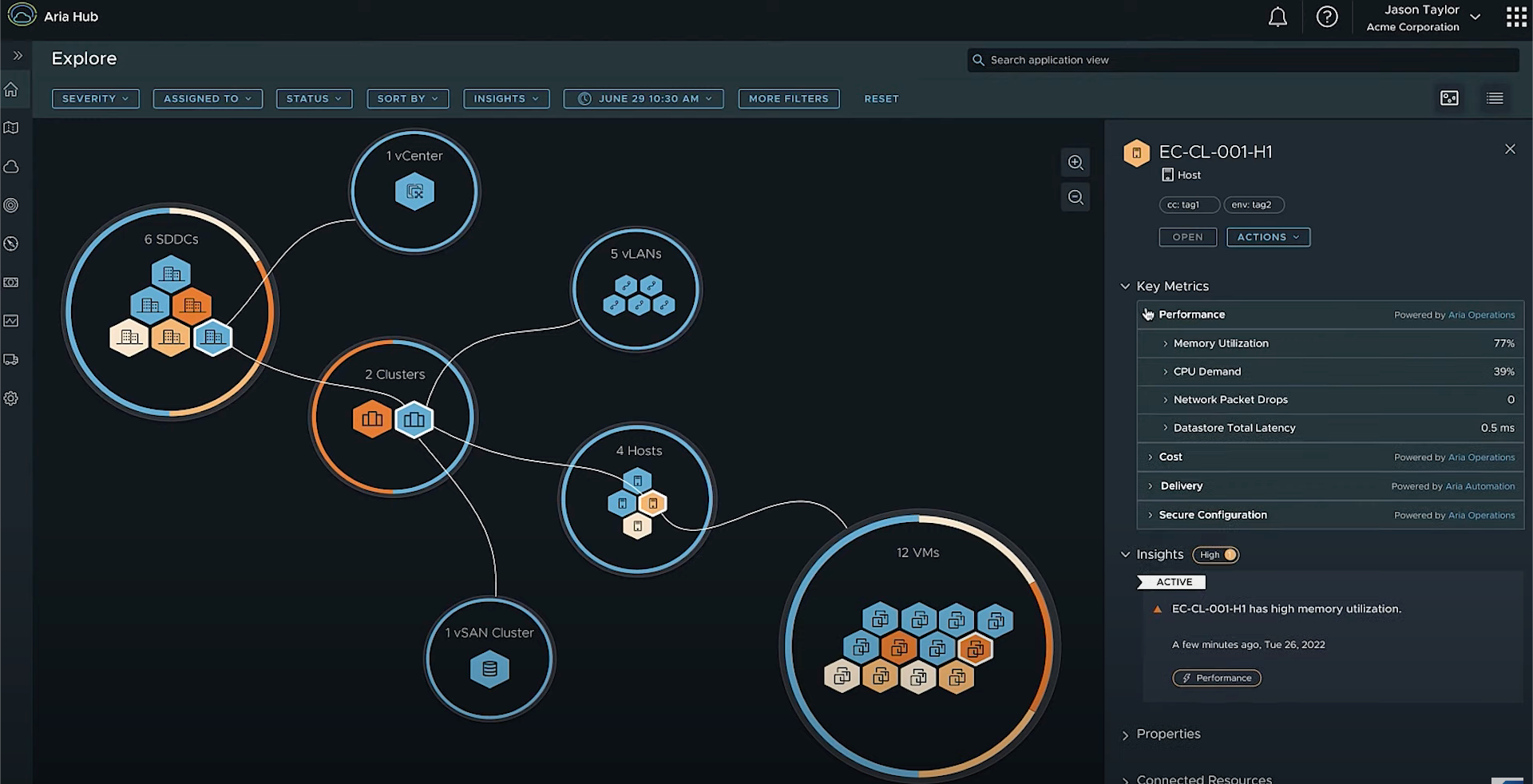 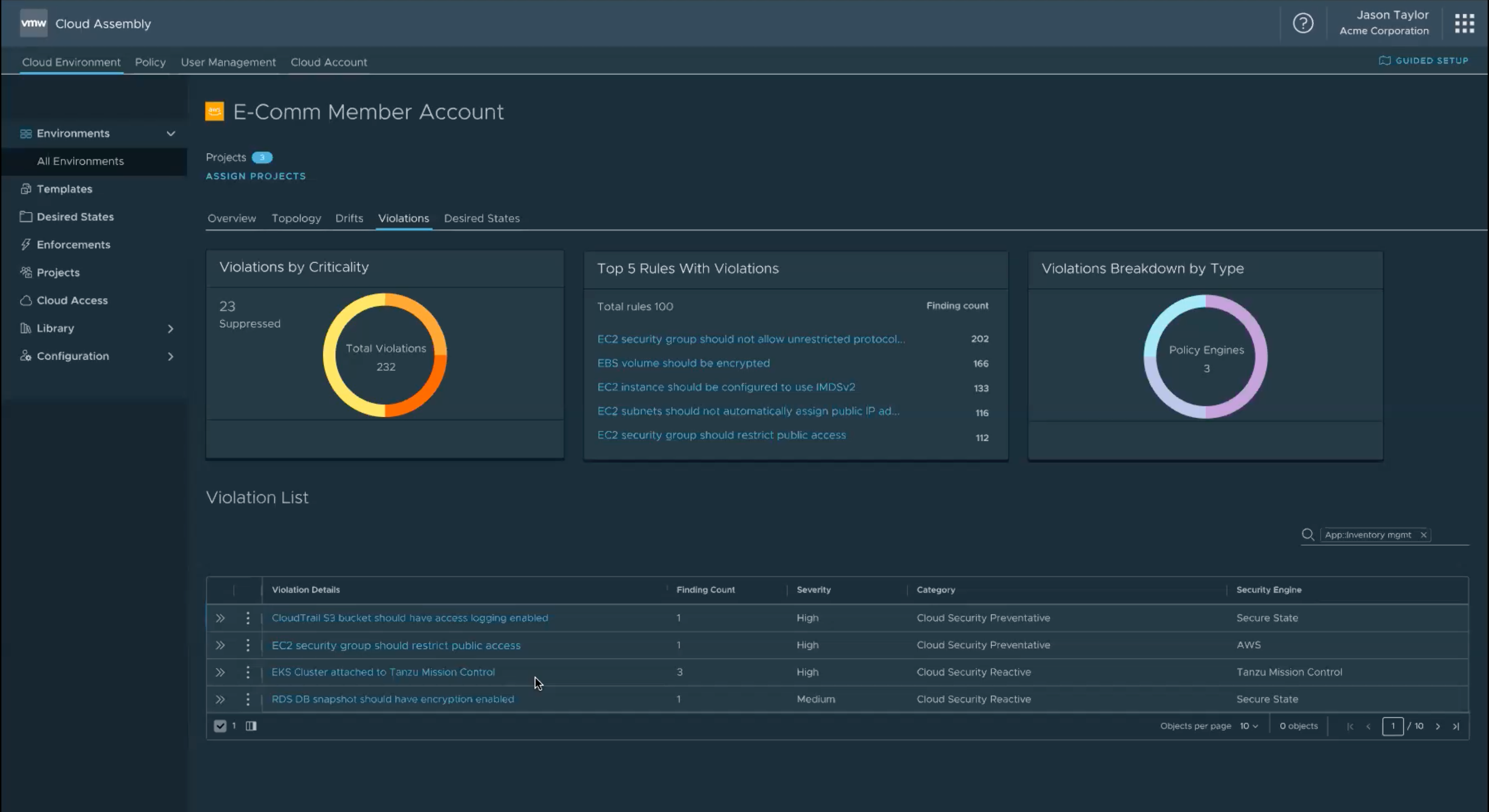 A third use case would be to utilize Aria Cost in conjunction with Aria Operations to find applications that are cheaper to run in VMware Cloud on AWS... 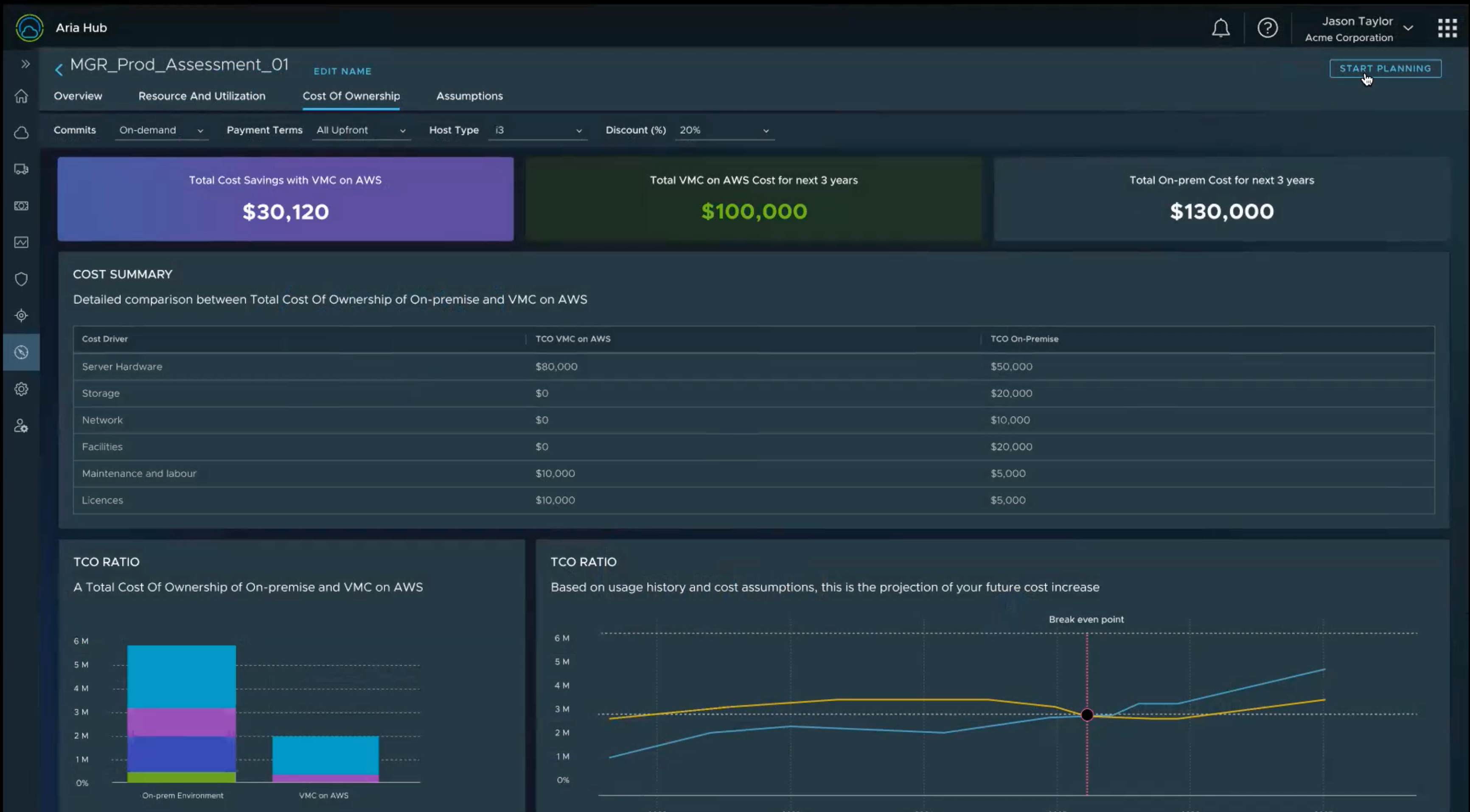 ... and use Aria Automation to create a pipeline of the actual migration of the application to the cloud 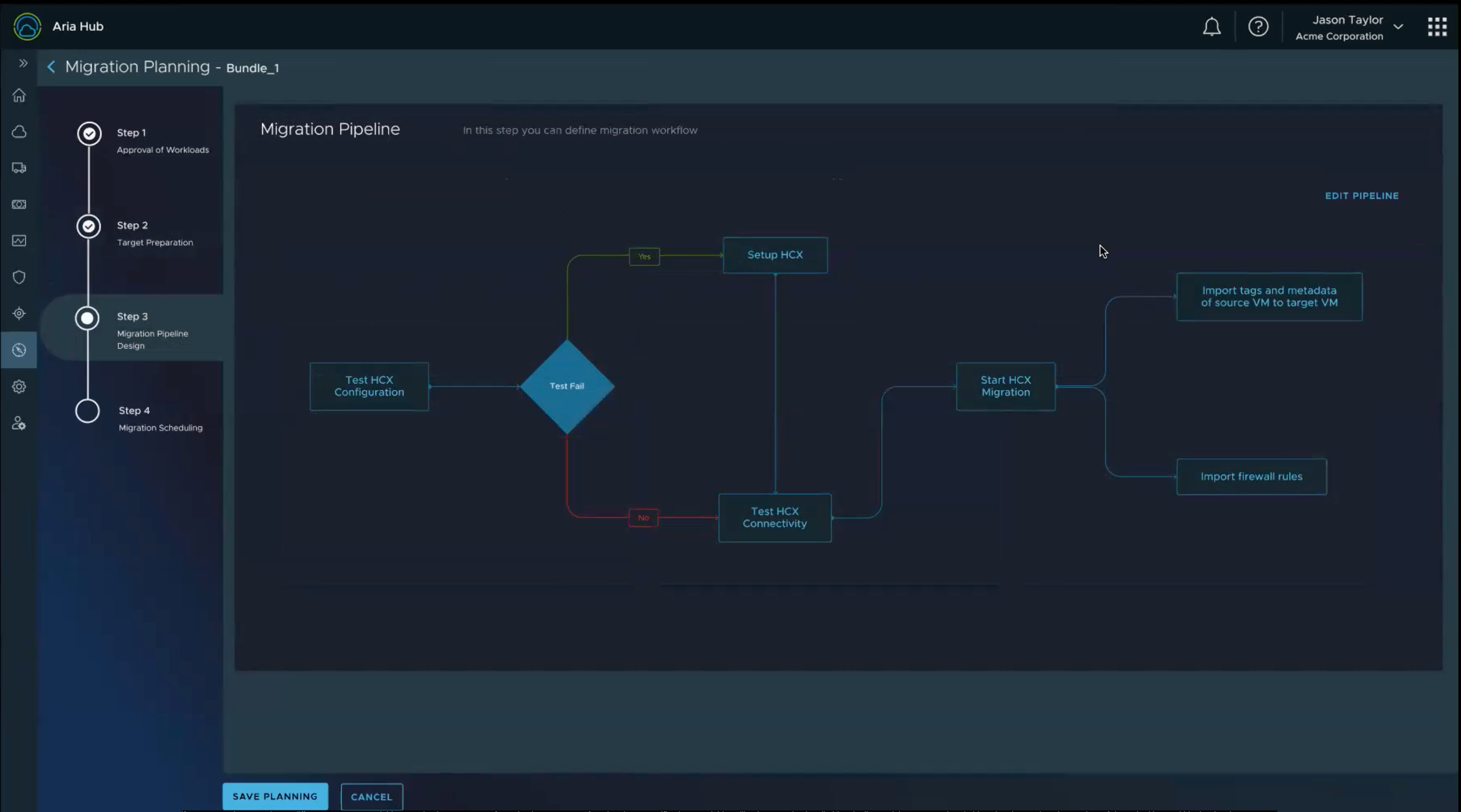 One of the questions that often comes to mind these days are why VMware have been investing so much in multi-cloud and even with public cloud capabilities? One might see this as a part of VMware wanting to be the operating system of not only your on-prem data center, but your entire cloud environment.

Of course the public cloud vendors have their own stack of management solutions, and some have solutions for multi-cloud, but VMware also have to keep their on-prem installs in mind. This combined with their investments in Modern Applications and the whole DevOps landscape, one could argue that they might be better suited to deliver a true multi-cloud offering.

In all I am excited for Aria Hub, it looks promising as a true global overlay of multiple clouds. However to get the full feature set and capabilities you would need to go all in with this. Both from a product standpoint, meaning licensing etc., but also from an operational standpoint meaning you'll need to actually use the products in the portfolio. I've seen quite a few customers with licenses for the whole vRealize suite that only utilizes a small portion of it.

One thing to be aware of is that the Aria Hub is a SaaS offering, and even though there are feature requests for an on-prem version I wouldn't expect that in the near future. At the time of this writing a few of the integrations and features in Hub is also SaaS only, like for instance Guardrails in Aria Automation.

This follows what VMware have been done for the last couple of years. Ship features in their SaaS products first and only after a while it might be included in the on-prem version. If you're an on-prem only (or even mostly) kind of shop, then a lot of the features and announcements is sadly not available to you.

Aria Hub is out in Beta now, and will be available soon.

You can sign up to a wait list for access to the Aria Hub Free Tier which will show some of the new features. Note that as of now it seems this will work with native public clouds only.