In this post we will take a look at backup and restore of workloads inside of vSphere with Tanzu. In this setup where we have vSphere with Tanzu setup with vSphere networking, we will use the Standalone Velero and Restic solution as opposed to the more integrated Velero operator that can be utilized when using NSX-T as the networking stack.

Backing up and restoring vSphere with Tanzu

First a note on backups of a vSphere with Tanzu environment..

vSphere with Tanzu consists of multiple components. Currently there's no solution that does a complete backup of all these components in one go (and maybe we'll never have one).

Note that, as mentioned, there are differences in the plugins/tools that can be used based on if we're using vSphere networking or NSX-T in our environment. The latter uses a Velero Plugin for vSphere which is more integrated than the standalone version we'll have to use without NSX-T, but this will also tie it to Tanzu and backups cannot necessarily be ported to other clusters. For a run through of using the Velero plugin, check out this blog post by Cormac Hogan

The focus of this post will be on backup and restore of workloads running in vSphere with Tanzu, i.e. what is running inside a Tanzu Kubernetes Cluster (TKC). 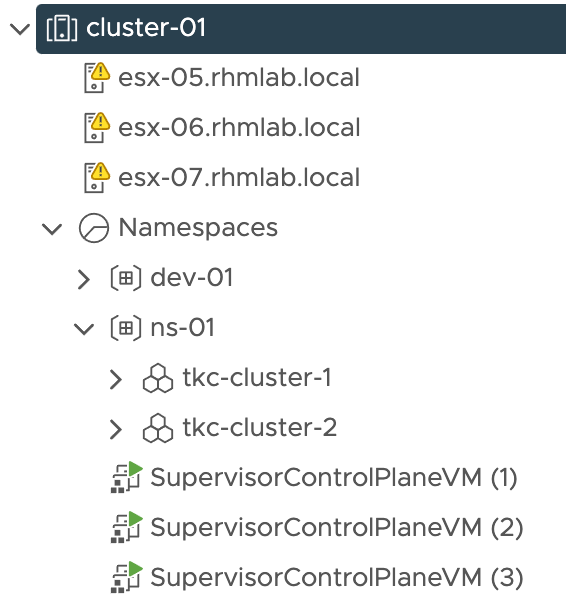 The tool used for doing backup and restore inside the TKC clusters is Velero. This is an open-source, Cloud Native Computing Foundation backed project for performing disaster recovery of Kubernetes cluster resources. It is also used for migrating resources and persistent volumes.

Velero supports a few storage providers, but again since the vSphere provider requires NSX-T as the networking stack we'll go for an object store and in this setup we'll use MinIO as the object store provider

MinIO can be installed in a container, on bare-metal or on virtual machines. In this setup we'll install it on a Ubuntu 20.04 VM.

VMware provides documentation on how to configure it, but we'll go through it step-by-step with a few additions and clarifications.

We'll create a directory for storing the MinIO data

We'll start MinIO manually first, later on we'll create a service for it

The output will give us the root user and password which we'll need. Note that this can be set with environment variables, which also is true for the console endpoint port. In my lab environment I'll leave it with the defaults. In a production environment this should taken care of.

We can verify the MinIO server by navigating to the console address (if you use the 9000 port you'll be redirected). Use the credentials recorded from the console output to log in 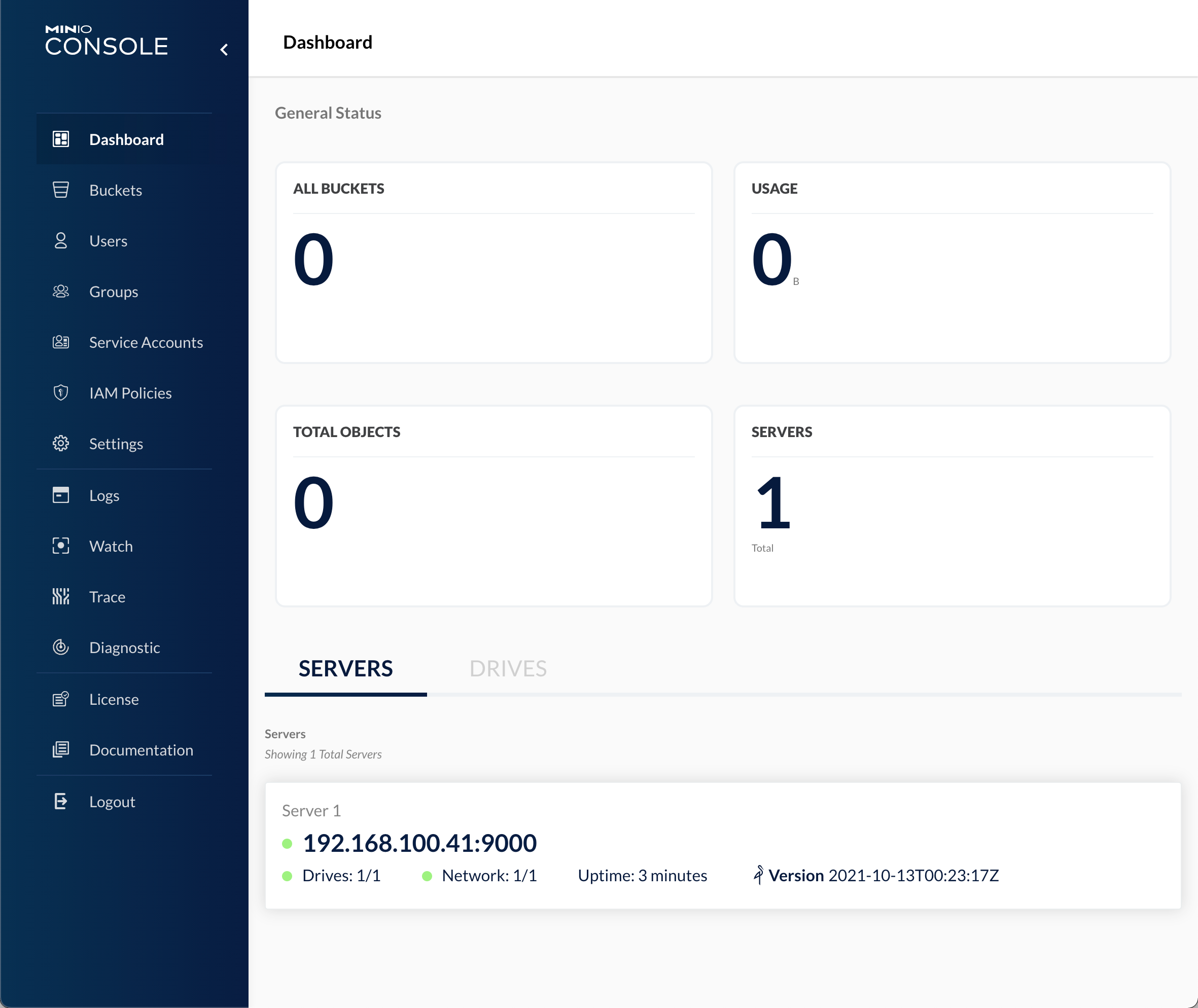 Let's stop the server and prepare a service for it.

First we'll create a user to run the service

Set the minio-user as the owner of the data directory

Copy the executable to /usr/local/bin

Add the following to the service file

Copy the service file to /etc/systemd/system

Start the MinIO service and check that it's running

Verify that you can access the MinIO UI and let's create a user account and a bucket to be used for our Tanzu backups!

Note that this could easily be done with the MinIO CLI tools, but we'll use the UI for demonstration purposes

First we'll create a user named velero and give it readwrite access. We could (and in prod should) restrict it to only the buckets used for backups, but for now I'm find with a generic access 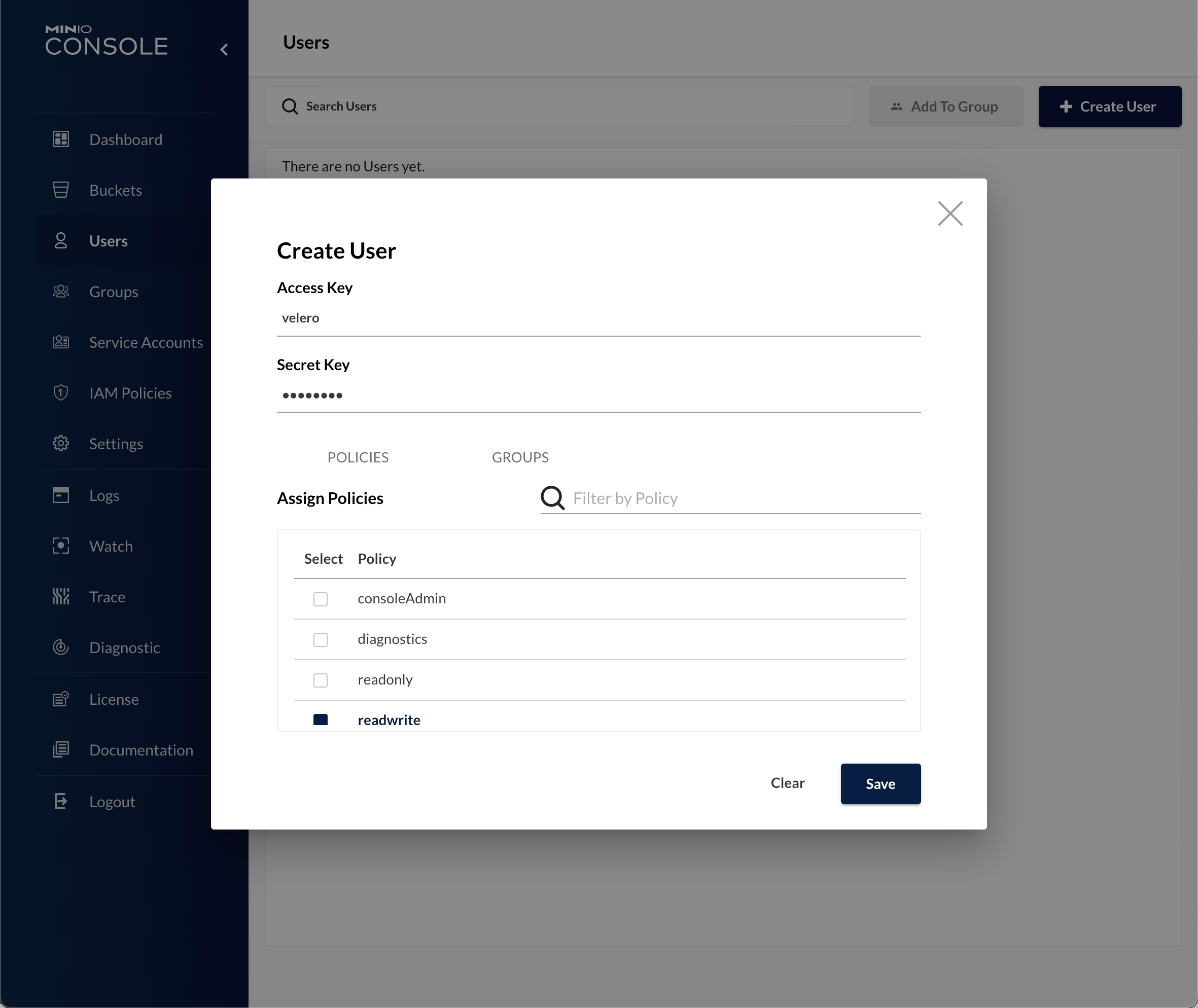 Now, we'll create a Bucket for our Tanzu backups.

Before you go ahead and create the buckets, you might put some considerations into our bucket structure.

In this post I'm doing a Velero install per TKC cluster so a bucket per cluster could be a strategy. Likewise, if you want to utilize the MinIO server for more than just backups then maybe you want to separate backups from other data and will end up with a specific backup bucket per cluster. In short, do some thinking before creating buckets for all of your clusters! 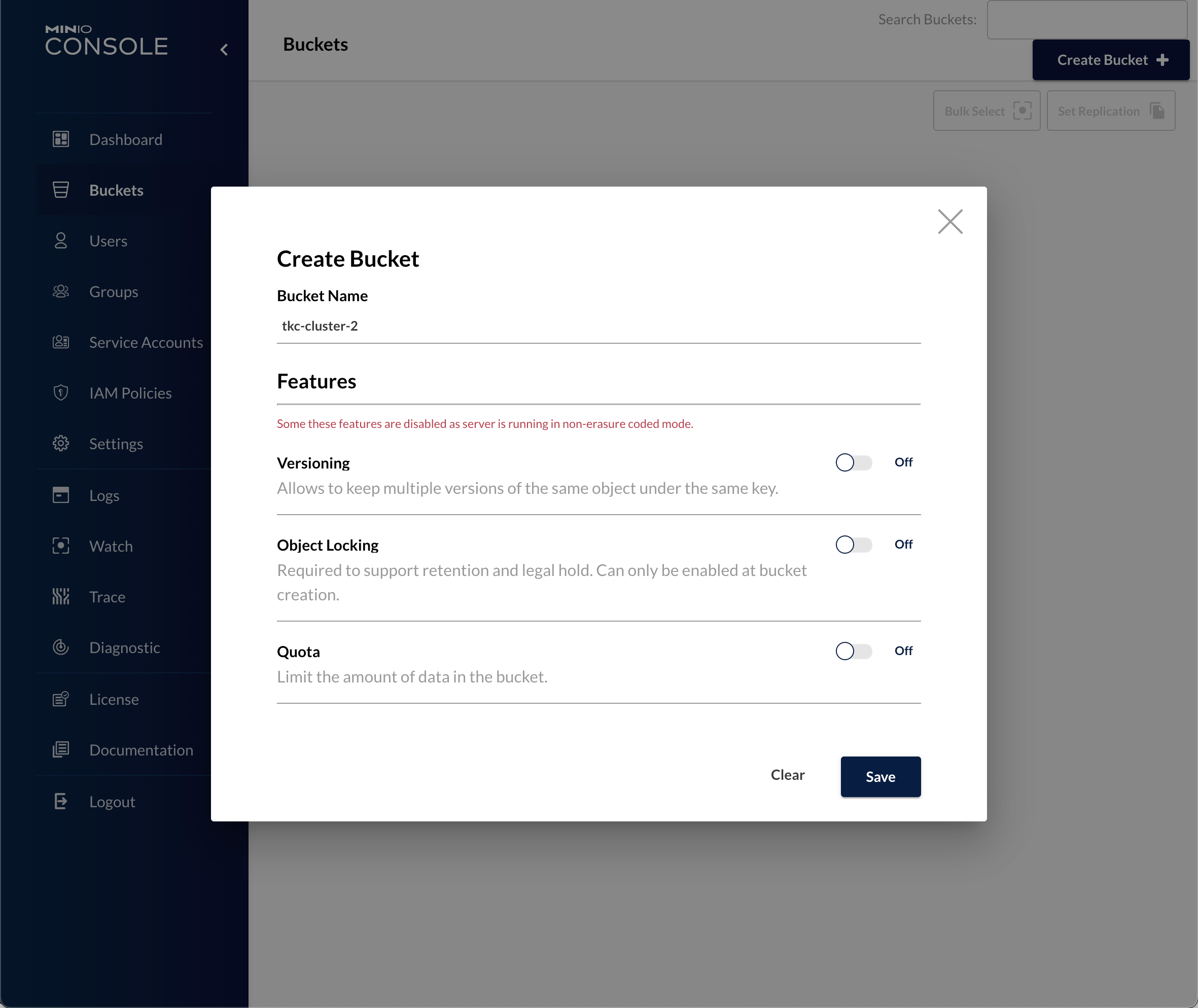 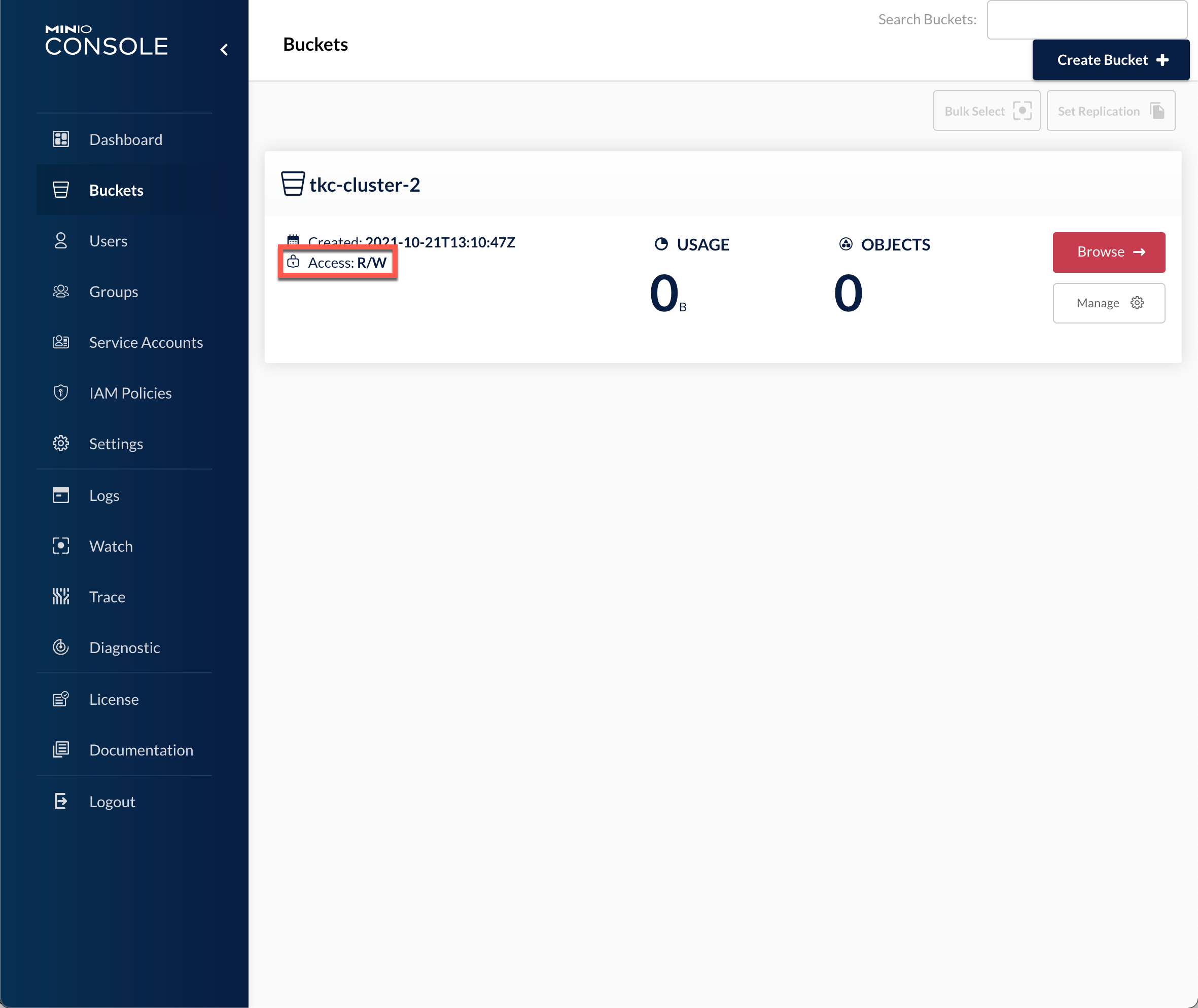 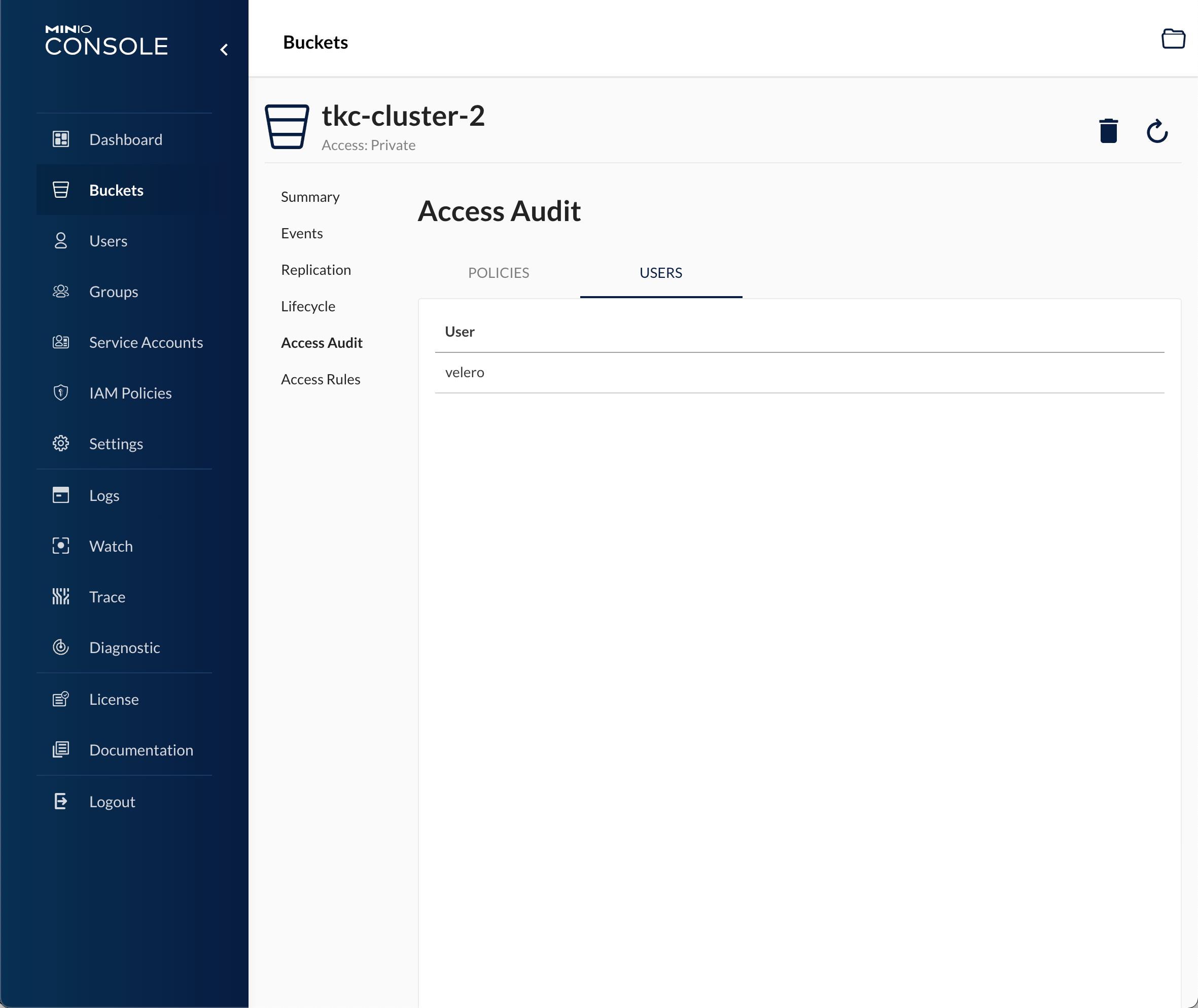 First let's take a quick look on the environment. We have two vSphere namespaces in this setup as we saw earlier in this blog post, and in one of the namespaces we have two TKC clusters

First we'll change to/verify that we are working with the correct context. The Velero CLI will automatically work with the current context

I'm saving this in a file called credentials-minio

Note that the VMware documentation doesn't include that [default] header in the credentials file. In my setup I got error messages like "Error getting a backup store" and "NoCredentialProviders: no valid providers in chain" if I left that header out. I got a clue from this discussion on Github on how to solve it

Now we're ready to install Velero and Restic in our TKC cluster. (Make sure you change the bucket, secret-file, s3Url and publicUrl parameters to reflect your environment) 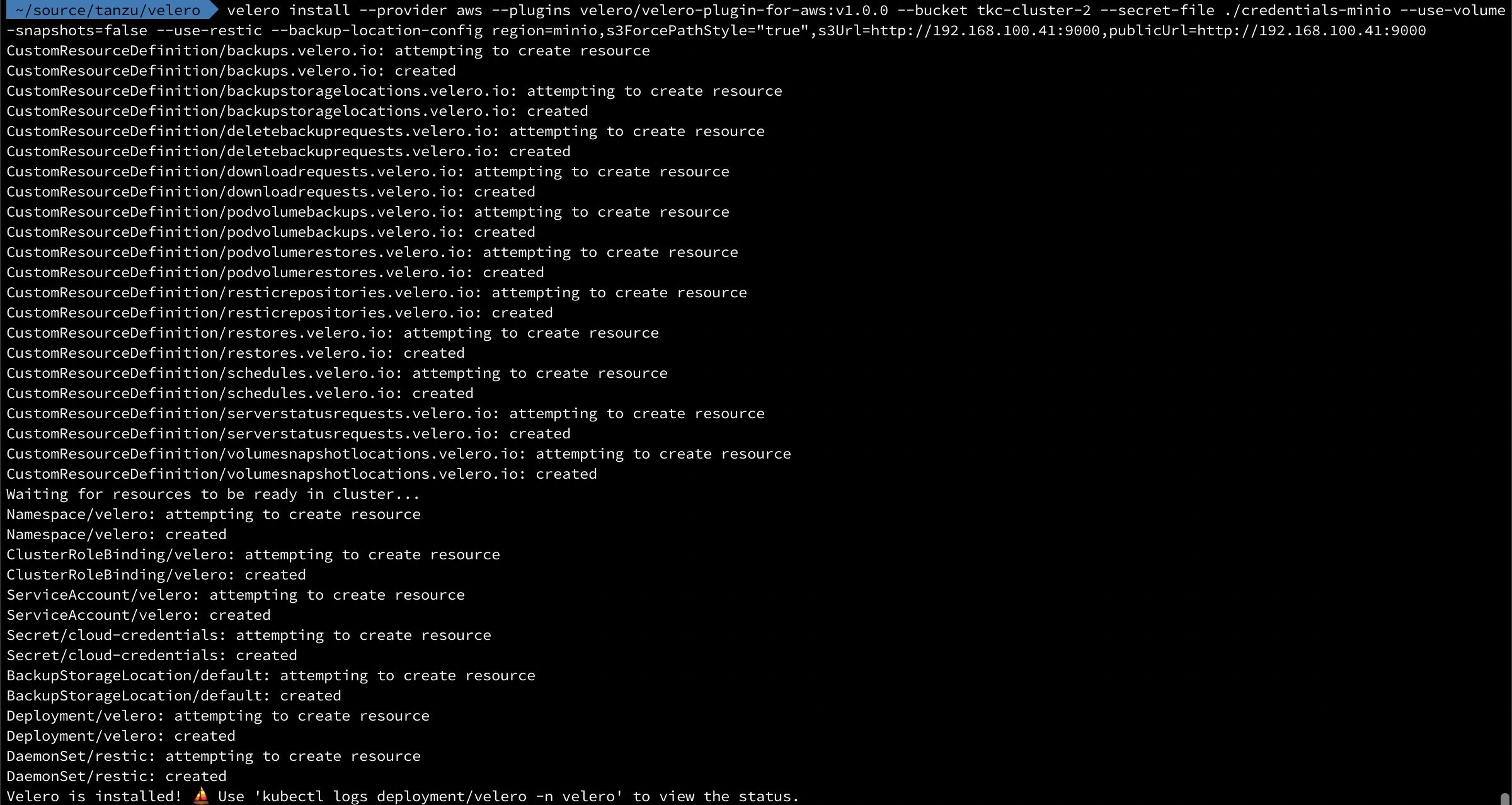 After a few minutes we can run the kubectl logs deployment/velero -n velero command to check the status of the install. The message we want to see is the Backup storage location valid, marking as available

With Velero installed we can try to run a backup in our cluster.

Create a backup with Velero

First, let's check out a simple workload that are running in our cluster 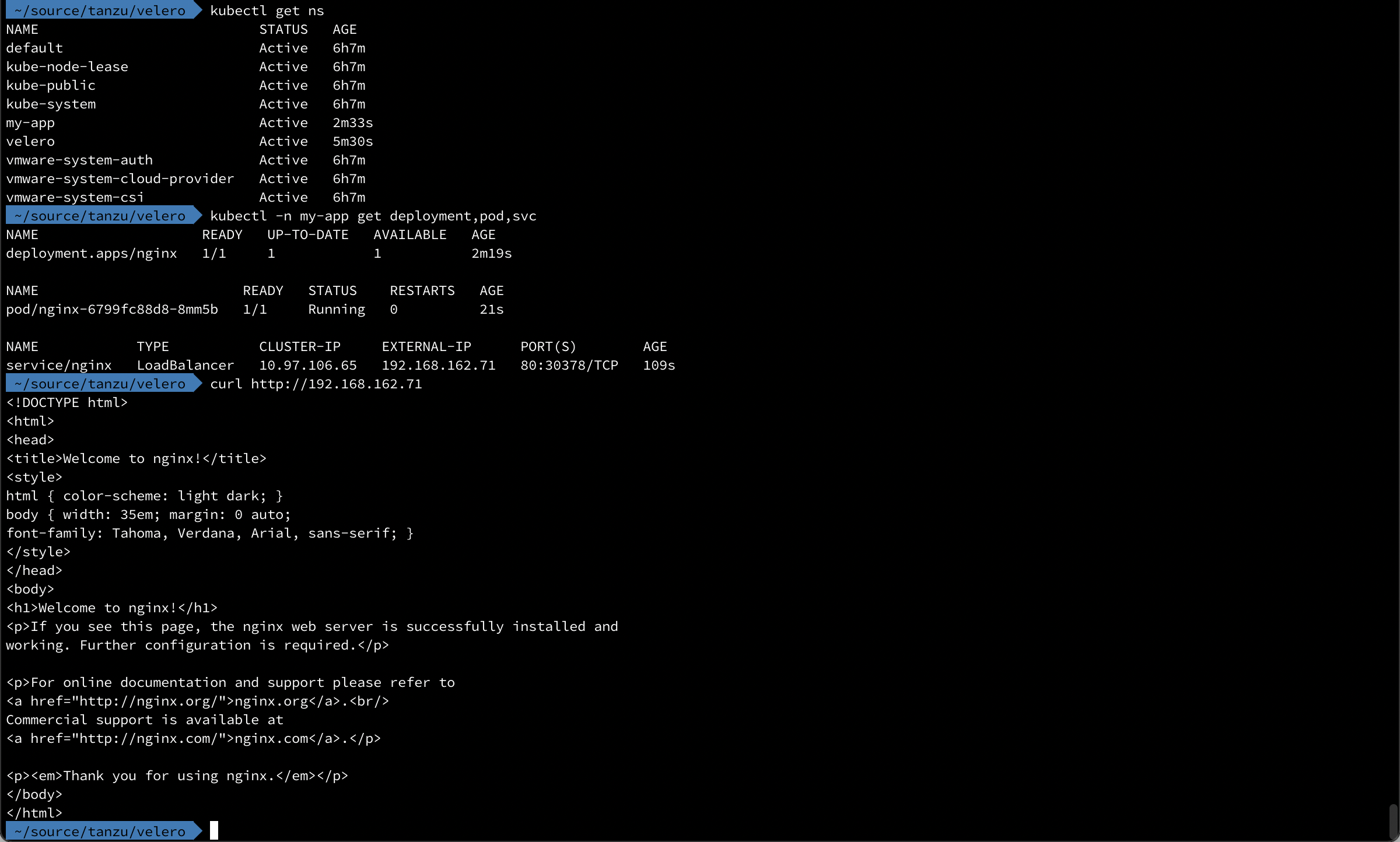 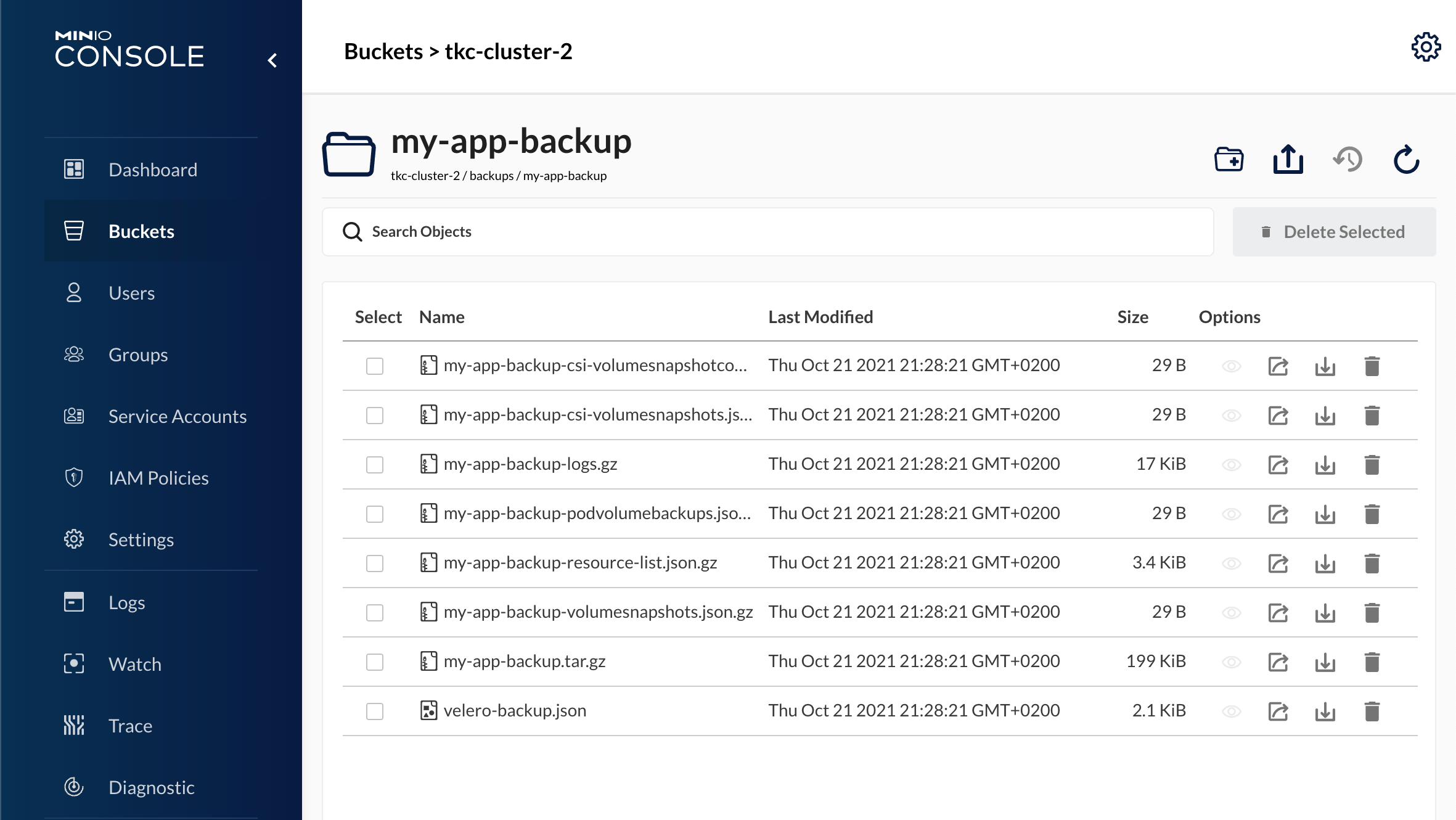 Delete app and do a restore

As we can see, our namespace is back and also our nginx deployment and the Load balanced service!

Ok, so what about losing an entire cluster? Or maybe we want to migrate our app to a different cluster?

Well, let's take a look at our tkc-cluster-1 cluster

Now, if we'd want to restore our backup taken from the different cluster we'll just install Velero and point it to our MinIO bucket. In fact we can use the exact same install command as we did in the first cluster. 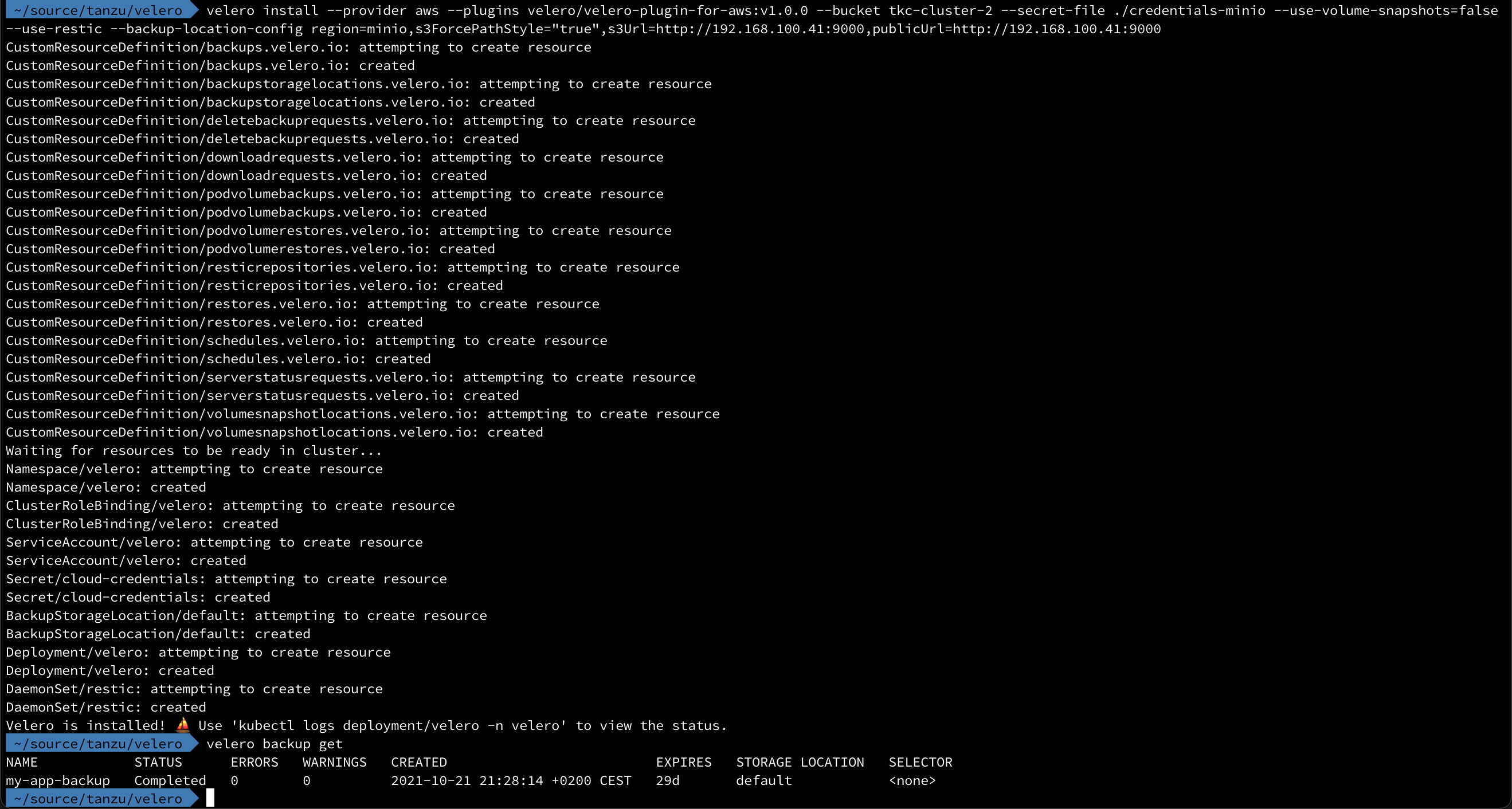 So, let's try a restore of that backup in this cluster!

There's a lot more to Velero (and Restic) than what we've looked at here, but hopefully this has been an intro to some of the capabilities in the product, and also shown that it's quite easy to get started with it.

Thanks for reading, please reach out if you have any questions or comments!